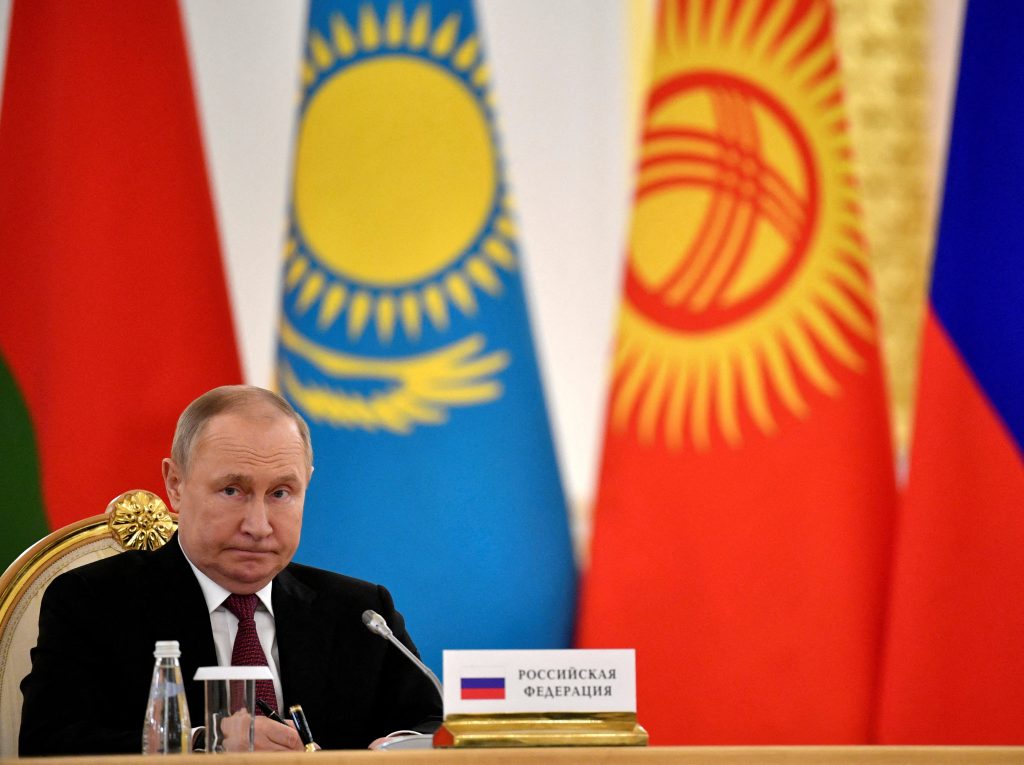 At a May 16 summit meeting in Moscow to mark the twentieth anniversary of the Collective Security Treaty Organization (CSTO), the Belarusian autocrat was the only leader to call on the military bloc to unite its forces in defense of Russia and against the West.

“Without a united front, the collective West will build up pressure on the post-Soviet space,” Lukashenka said in a speech to leaders of the Russian-dominated alliance that also includes Armenia, Kazakhstan, Kyrgyzstan and Tajikistan.

But apparently there were no takers. Other than Putin and Lukashenka, no other leaders raised the war in Ukraine during their public remarks. According to a report in Meduza, the conflict was discussed behind closed doors but a joint statement issued after the summit did not mention Ukraine at all, nor did it refer to Russia’s so-called “special military operation” there.

CSTO Secretary General Stanislav Zas told reporters that the prospect of deploying troops from alliance members to Ukraine was not discussed. Kazakhstan, which has the second largest military in the bloc after Russia, has repeatedly ruled out sending CSTO troops to Ukraine. Kazakhstan has also refused to help Russia evade Western sanctions imposed in response to Putin’s invasion.

The lack of support from the six-member bloc underscored Russia’s deepening international isolation, something that is becoming clear even to the Kremlin’s staunchest supporters. “We are in total geopolitical isolation and the whole world is against us, even if we don’t want to admit it,” Mikhail Khodaryonok, a retired colonel and a pro-Kremlin columnist, said in a remarkable show of candor on Russian state television earlier this week.

Nevertheless, as the CSTO summit wrapped up, Lukashenka moved to demonstrate his usefulness and loyalty to Putin by massing his own troops along the Belarusian border with Ukraine. The move appeared to be an attempt to distract Ukrainian forces away from opposing Russia in eastern Ukraine’s Donbas region, a report by British military intelligence stated.

“Following exercise activity earlier this month, Belarus has announced the deployment of special operations forces along the Ukraine border, as well as air defense, artillery and missile units to training ranges in the west of the country,” the UK Defense Ministry said in a public bulletin. “The presence of Belarusian forces near the border will likely fix Ukrainian troops, so they cannot deploy in support of operations in the Donbas.”

While Lukashenka may be Putin’s last remaining ally in the former Soviet space, he is also an erratic one.

As I have written in this space, Lukashenka’s survival instincts simultaneously drive him in opposite directions on the Ukraine war. His near total dependence on Putin for political survival drives Lukashenka to embrace the war. At the same time, the fact that the war is going poorly, is unpopular in Belarus, and exposes him to additional sanctions and deeper international isolation encourage Lukashenka to distance himself from the conflict.

According to British intelligence, the Belarusian dictator is walking a very thin line. Lukashenka is “likely balancing support for Russia’s invasion with a desire to avoid direct military participation with the risk of Western sanctions, Ukrainian retaliation, and possible dissatisfaction in the Belarusian military,” British military intelligence concluded.

Being one of Putin’s few remaining friends has already proven costly for Belarus. Prime Minister Roman Golovchenko said on May 15 that Western sanctions have cost Belarus at least USD 16 billion and possibly as much as USD 18 billion in export revenues. “Because of the sanctions, almost all of Belarus’s exports to the countries of the European Union and North America have been blocked,” he commented.

The discord that was evident at the CSTO summit in Moscow demonstrates how Western sanctions and pressure on Russia and Belarus are working. Lukashenka himself appeared to acknowledge this in his remarks at the summit, complaining about “hellish sanctions” and saying, “Belarus and Russia are being defamed and excluded from international organizations at the whim of the West.”

After witnessing the pain and isolation that Belarus is suffering for supporting Putin’s war, with costs ranging from economic sanctions to exclusion from international sporting events, Russia’s other erstwhile allies in the CSTO are clearly thinking twice about giving the Kremlin even token support.

Image: Russian President Vladimir Putin attends a meeting of the leaders of the Collective Security Treaty Organization (CSTO) member states, at the Kremlin. May 16, 2022. (Alexander Nemenov/Pool via REUTERS)