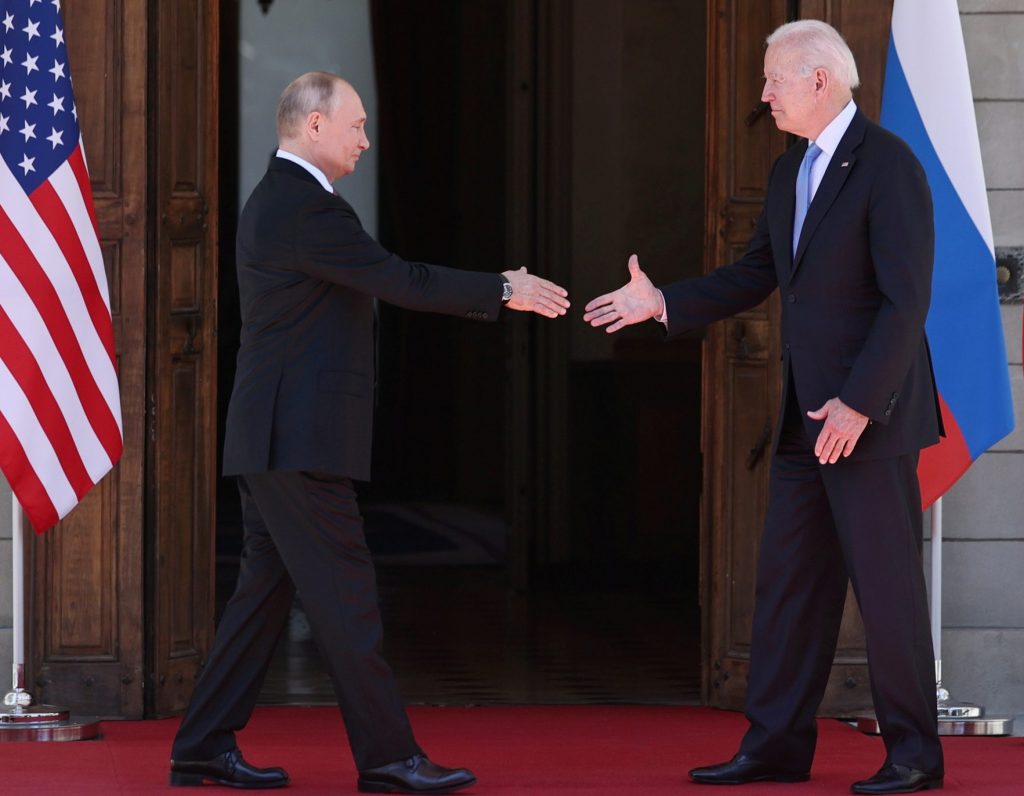 Few countries were as anxious as Ukraine ahead of Wednesday’s summit meeting in Geneva between US President Joe Biden and his Russian counterpart Vladimir Putin.

Since 2014, Ukraine has been the victim of an ongoing Russian military intervention and partial occupation that has plunged the international community into what many now regard as a new Cold War. While the democratic world has imposed sanctions on Russia and consistently backed Ukrainian sovereignty, fears remain that as the conflict drags on, Western leaders may seek to reach a compromise with the Kremlin at Ukraine’s expense.

These concerns have grown since mid-May when news broke that the Biden Administration was relaxing US sanctions on a strategically important Russian pipeline project that bypasses Ukraine and will likely render the country’s gas transit infrastructure redundant. The move was ostensibly designed to ease tensions with Russia’s pipeline partner, Germany, but opponents argue that allowing construction to proceed will free Moscow’s hand for a possible major escalation in its undeclared seven-year war against Ukraine.

Speculation over a fresh Russian military offensive in Ukraine has been widespread in recent months and was instrumental in paving the way for this week’s meeting in Switzerland. Throughout April, international attention was focused on an unprecedented buildup of Russian troops and military hardware close to the Ukrainian border and in regions of Ukraine currently under Russian occupation. This saber-rattling display was accompanied by a furious propaganda campaign on Russian state TV and warnings from senior Kremlin figures that any escalation would mean “the beginning of the end” for Ukraine. It was at the height of these tensions that Biden first proposed a summit with Putin.

The recent G7 and NATO summits that preceded the Biden-Putin meeting offering little comfort for Ukraine. Speaking in Brussels earlier this week, Biden responded to Ukrainian President Volodymyr Zelenskyy’s appeal for clarity on his country’s prospects of receiving a NATO Membership Action Plan by stating that while the door remained open for Ukraine, Kyiv still had to address corruption issues before it could expect any progress.

Given the apparent setbacks and very real security concerns confronting Ukraine in the run-up to Wednesday’s summit, many in Kyiv were understandably satisfied with the outcome. While there were no significant breakthroughs towards ending Russian aggression, the meeting in Switzerland allowed the new US President to underline his continued support for Ukraine and send a clear message to the Kremlin that there will be no bargaining over the country’s independence or right to determine its own future.

As the dust settles on the historic first meeting between presidents Biden and Putin, the Atlantic Council invited a range of experts to share their thoughts on the implications of the summit for Ukraine.

John Herbst, Director, Eurasia Center, Atlantic Council: In the run-up to Geneva, Washington’s policy unfortunately raised doubts among its allies and partners in Eastern Europe about America’s readiness to withstand Kremlin provocations. The Biden Administration’s disastrous decision on Nord Stream 2, while a gesture to Germany, was also a gift to Putin and a calamity for the Baltic states, Poland and Ukraine. The Administration’s non-response to a series of Russian cyberattacks on the US also suggested weakness.

But in Geneva, Biden gave Putin to understand that, while he would like to improve relations with Moscow, much will depend on Kremlin activities in the months ahead. Given the recent cyberattacks, he correctly stressed cyber, but he also mentioned Ukraine (and other issues) as well. This demonstrates that, despite recent missteps, Biden understands that the US has a fundamental interest in helping Ukraine stop Kremlin aggression in the country’s eastern Donbas region.

While this will not mean a quick end to Moscow’s war on Ukraine, it helps Putin understand that the support the US provided Kyiv during Moscow’s recent military buildup was no fluke. The US will see to it that the Kremlin continues to pay a price for its ongoing aggression.

Daniel Fried, Distinguished Fellow, Atlantic Council: The summit outcomes have vindicated the decision to hold the meeting at the end of Biden’s European trip, with the US President coming off a good week of reforging US alliances. Some Ukrainians (and Poles), concerned about the Biden approach to Nord Stream2, had feared a US-Russia deal over their heads. That fear has real roots in history (and Trump would have happily made it if he could). But judging by Wednesday’s meeting, no such deal is in the offing. The US will stand by Ukraine’s freedom and resist Putin’s aggression.

Put the Biden and Putin pressers side by side. Putin looked like a weak parody of himself. Biden looked like he represents America’s better foreign policy traditions: democratic values, an international system that advances them, and standing up to tyrants.

The meeting generated some progress on risk reduction (strategic stability talks), bilateral relations (returning ambassadors after Putin pushed them out), and perhaps some discussions of cyber aggression red lines. But Biden also made clear that the US will not tolerate Putin’s aggression against the US or our friends and allies. And Biden also made clear that Putin’s repression at home (such as against Alexei Navalny) is an issue in bilateral relations. Repression at home leads to aggression abroad, as Biden understands.

Biden held firm on his framework for US-Russia relations: cooperate where possible, push back on aggression, and stand up for democracy and human rights, including inside Russia. Putin now knows that he cannot game or intimidate the US President without challenge.

Alexander Vershbow, Distinguished Fellow, Atlantic Council: Joe Biden’s trip to Europe was a great success in restoring US leadership and transatlantic unity, and in terms of securing agreement on a forward-looking agenda for NATO, the G7 group of leading democratic nations, and the US-EU partnership. But the results for Ukraine were a mixed bag.

In Geneva and throughout his trip, Biden voiced strong support for Ukraine’s sovereignty and territorial integrity, and for its Euro-Atlantic aspirations. He pressed Putin to negotiate a political solution to end Russia’s undeclared war in eastern Ukraine, raising hopes of a more active US diplomatic role that could reinvigorate the moribund Minsk and Normandy Format negotiations. Biden pledged to push back firmly against Russian political warfare and cyberattacks, and to raise the costs for Russian attempts to subjugate its neighbors.

At NATO, the June 14 summit communique reaffirmed the Alliance’s 2008 Bucharest decision stating that Ukraine and Georgia will be members one day, while making clear that a Membership Action Plan (MAP) remained an integral part of the process. Allies reiterated that, even without MAP, Ukraine has all the tools necessary to pursue membership in the framework of the NATO-Ukraine Commission (NUC) and the Annual National Program (ANP). But NATO members were unwilling to grant a MAP to Ukraine on this occasion, despite a full-court press by President Zelenskyy in the run-up to the summit. Most allies remain fearful of provoking a harsh Russian reaction or implying a readiness to extend a security guarantee to Ukraine, now or in the future.

In his Brussels press conference, Biden said that Ukraine has much more work to do to meet the criteria for a MAP, in particular reforms to clean up corruption. He curtly rejected the notion that Russia’s occupation of Ukrainian territory gives it a de facto veto on Ukraine’s future membership, but left unanswered the question of how NATO intends to disabuse Putin of that belief.

In sum, Ukraine finds itself in the same position after Biden’s trip as it did before the week of summits, with no clear timeline for a NATO MAP or actual membership. Putin stated at his Geneva press conference that Ukrainian membership only came up briefly in his meeting with Biden, but confirmed that it remains a red line for Russia.

The US has its work cut out if it hopes to overcome NATO’s inertia on the question of future Ukrainian membership. A low-cost first step would be to grant Ukraine the status of Major Non-NATO US Ally (MNNA), which would expand Ukrainian access to US defense assistance and training. In the meantime, Ukraine bears the primary burden of deterring further Russian aggression, with the support of the US and a handful of other allies.

Ian Brzezinski, Senior Fellow, Atlantic Council: US President Joe Biden returns from his Geneva summit meeting with Russian President Vladimir Putin with two accomplishments relevant to Ukraine. First, the preceding G7, NATO, and US-EU summits underscored the significant progress President Biden has made in reanimating transatlantic confidence in, and appreciation for, US leadership. When unity is strong, the transatlantic community is far more effective in protecting and promoting its interests and values, including checking Putin’s revanchist ambitions and provocations.

Second, reports indicate that President Biden clearly, calmly, and firmly placed President Putin on notice for the latter’s acts of aggression, from the continued occupation of Ukrainian territory to cyberattacks and other malicious and disruptive actions.

The success of Biden’s diplomacy at this summit will ultimately be determined in the coming months. Only then will we know if the Biden-Putin meeting yields a change in Russia’s conduct and, above all, a more robust readiness of the United States and Europe to exercise their political, economic, and military power to roll back Russia’s illegal seizure of Ukrainian territory and in response to any future provocations by Moscow.

Diane Francis, Senior Fellow, Atlantic Council: US President Joe Biden drew three lines in the sand with Vladimir Putin during this week’s summit. Ukraine’s sovereignty and territorial integrity must be respected; critical American infrastructure should not be targeted with cyberattacks or other means; and Russian democracy activist Alexei Navalny must not die in prison. “I made it clear to him that I believe the consequences of that would be devastating for Russia,” Biden warned.

The failure to provide Ukraine with a NATO membership road map is a setback, along with Biden’s remark that the Minsk process, though thoroughly discredited, is the mechanism to settle Ukraine’s war with Russia. Sadly, Putin continues to escalate and has made the Black Sea a flash point in recent months by strengthening his informal blockade of Ukrainian ports and building up maritime forces capable of staging an amphibious invasion.

Ukrainian President Volodymyr Zelenskyy must now seek to fast-track anti-corruption measures and present a new Minsk process, with US and European Union involvement, at his White House meeting with Biden, which is set to take place later this summer.

The international community spent much of April 2021 nervously watching the Ukrainian border for signs of a new Kremlin offensive, but Russia’s next escalation may come in the Black Sea.