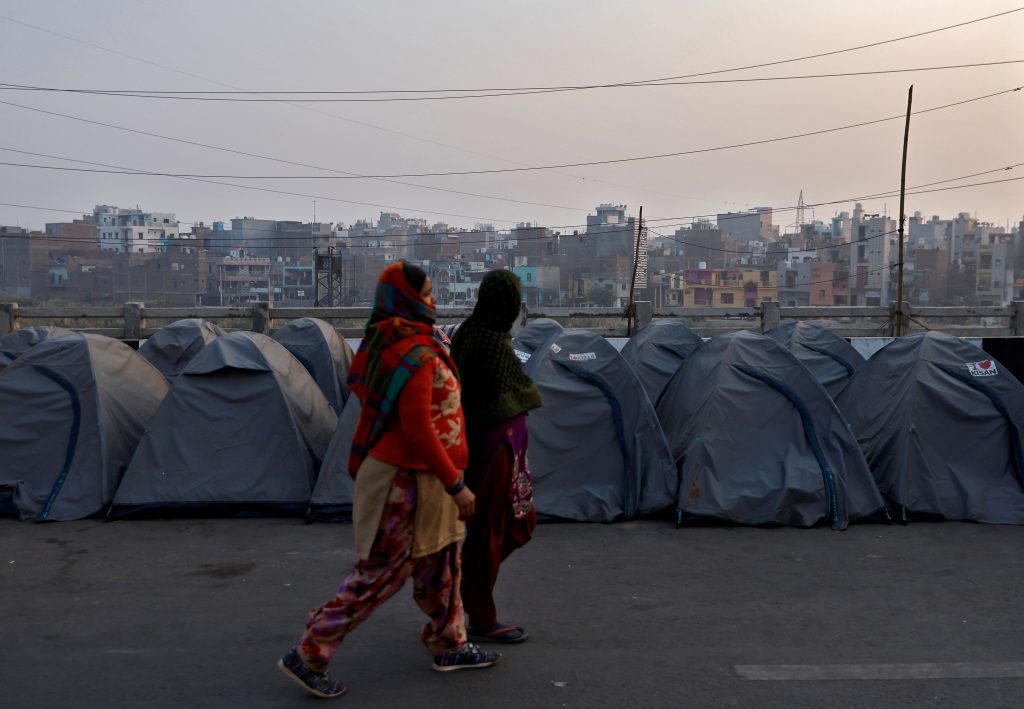 Women walk past rows of tents used by farmers who have gathered to protest against farm laws at Ghaziabad, India, January 28, 2021. REUTERS/Danish Siddiqui

On March 23, 2021, the Atlantic Council’s South Asia Center partnered with the U.S.-Afghan Women’s Council (USAWC) and the American Council on Women, Peace and Security (WPS) to host an event on women’s gains in Afghanistan, the critical role of Afghan women in Afghanistan’s peace and security, and the role that US actors have in partnering with and empowering Afghan women. This event was the third and final installment in the event series focusing on the gains made by Afghan women, and their implications on peace in Afghanistan. Irfan Nooruddin — Director of the Atlantic Council’s South Asia Center — set the stage by introducing the esteemed list of panelists that included Minister Hasina Safi, Acting Minister for Women’s Affairs in the Government of Afghanistan; Fatima Gailani, Member of the Afghan Negotiating Team andMember of the Constitutional Loya Jirga; and Lt. Colonel Natalie Trogus, Former advisor to the Afghan Ministry of Defense and former gender advisor to the U.S. military. Sara Greengrass, Executive Director of the U.S.-Afghan Women’s Council presented the closing remarks and Ambassador Paula Dobriansky — Vice Chair of the Scowcroft Center for Strategy & Security Atlantic Council — moderated the event.

Fatima Gailani began by highlighting the challenges that come with involving women at the community level in order to effectively represent their voices and priorities at the table. Ms. Gailani discussed how Afghan women activists, young people, and other stakeholders come together via virtual meetings to exchange notes with their respective teams. Ms. Gailani and her team work hard for an inclusive peace where women can demonstrate leadership as well as try to center Afghan voices in creating a peaceful future within Afghanistan. Their work strives to create a future where not only women, but all minorities, can enjoy a higher quality of life in the country.

Following this, Ambassador Dobriansky asked Ms. Gailani how the tremendous gains in women’s leadership in Afghanistan can be preserved and expanded upon. Ms. Gailani responded by using her personal narrative as an example of what she wanted to see in Afghanistan’s future. She expressed the will of Afghan women and male allies to collectively fight for equal rights regardless of gender. Ms. Gailani also stressed upon the importance of financial aid to Afghanistan as a means to hold onto all the gains that the nation has achieved in the last 20 years, as well as to ensure sustainable prosperity and success.

Ambassador Dobriansky then turned to Colonel Lieutenant Trogus to inquire about her work with gender advising in Afghanistan, its challenges, biggest wins, and her recommendations on how women can achieve more. Lt. Trogus replied that she and her team met with ministers to coordinate with the international community and the various embassies who provided support to Afghan women. She stated that one of the biggest challenges her team experienced was the Department of Defense’s unfamiliarity with the topic of women’s issues in Afghanistan. As a gender advisor, Lt. Trogus worked with the Afghan Minister of Interior as well as with the Minister of Defense in implementing women’s peace and security initiatives. A key win for the Lt. was when her team influenced a deal which informed the Afghan staffing guide for the Army, thereby integrating women as soldiers into the Army. Additionally, she and her team secured funding to hire and pay civilian women as  daycare workers, so that Afghan women soldiers would have reliable childcare while at work.

After Colonel Lieutenant Trogus described her work, Minister Hasina Safi provided insights into  her work with the Ministry of Women’s Affairs. Minister Safi recollected her drive to join the government ministry, inspired by the opportunity to implement policies for the empowerment of women. She indicated that this was the first time local government and women have had a place in Afghanistan’s politics. The minister and her staff coordinated with various education and social activists in order to have clear analysis-based solutions that local governments could use to be more effective. She also described her desire for mutual accountability and responsibility within Afghanistan, as well as with regional and international actors.

In conclusion, Sara Greengrass thanked all the speakers and partners for their efforts in hosting the event. Ms. Greengrass asserted that neither women’s leadership nor everyone’s duty to support and strengthen women’s leadership is time-bound. She expressed that in order for Afghanistan to rebuild and sustain peace, along with its diversity of ideas, experiences, and leadership, then action will be needed from all its people. The dedicated long-term involvement of women would allow for systematic approaches to peace and create an inclusive vision of Afghanistan’s future.

Women’s gains in Afghanistan: Supporting economic opportunities for Afghan women as a driver of peace and security

The Atlantic Council’s South Asia Center hosted an event on the gains that women have made in Afghanistan, the critical role of Afghan women in Afghanistan’s peace and security, and the role that US actors have in partnering with and empowering Afghan women.