The Atlantic Council announced today the launch of the Freedom and Prosperity Project in the Scowcroft Center for Strategy and Security, which will advocate in favor of economic freedom, the rule of law, and representative government as the best path for developing countries to achieve prosperity. 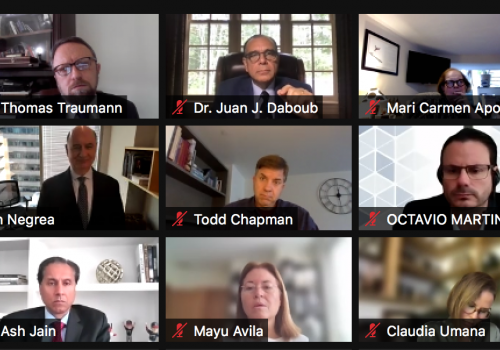 Workshop on freedom and prosperity in Latin America

The Atlantic Council’s Freedom and Prosperity Project, on September 28, 2021, in collaboration with the Adrienne Arsht Latin America Center and Brazilian think tank Fundacao Getulio Vargas (FGV), hosts the first in a series of virtual workshops on strengthening economic freedom, rule of law, and representative government in different regions across the world.

How will the next Congress affect US policy on Ukraine, China, the economy, and more?

The next two years of US President Joe Biden’s term will likely look markedly different from the first two. We asked our experts what's in store.

Workshop on freedom and prosperity in Asia

On February 16, 2022, the Atlantic Council’s Freedom and Prosperity Project, in collaboration with the Centre for Civil Society in India, hosts the fourth and last in a series of virtual workshops on strengthening economic freedom, rule of law, and representative government in different regions across the world.

Dan Negrea is the Senior Director of the Freedom and Prosperity Center.

He was the State Department’s Special Representative for Commercial and Business Affairs between 2019 and 2021. In that capacity, he pioneered and led the Deal Team Initiative, a coordination mechanism between U.S. government agencies. The initiative promotes business relations between U.S. and foreign companies around the world.

He was a member of the Secretary of State’s Policy Planning office between 2018 and 2019 where he was responsible for the economic portfolio. He coordinated the Global Entrepreneurship Summit held in The Hague in 2019 that was attended by 2,000 participants from government, business, academia, and international organizations.

For three decades before that, he held leadership positions in Wall Street firms. He raised over $15 billion in financings in the United States and abroad, mostly for middle-market companies.

He defected from Communist Romania where he had been an official in the Ministry of Finance and was involved in negotiating government loans with the World Bank and the International Monetary Fund.

He holds an MBA from Cornell University and an MA from the School of International Economic Relations in Bucharest, Romania. He has published extensively on foreign affairs.