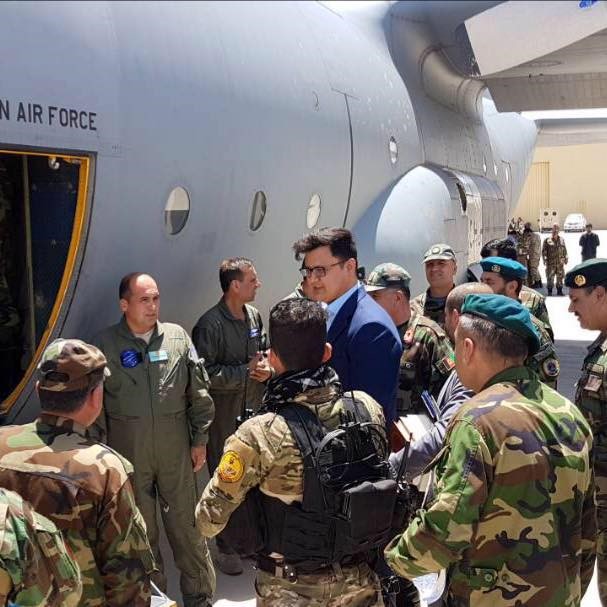 If the past four decades of fighting have taught us anything, it is that there is no military solution to the current Afghan conflict. For a diverse and pluralistic country, the only way to achieve peace and stability is through a political settlement.

And yet, in the wake of the US military’s departure, Afghans are already mobilizing and re-arming themselves, preparing in case peace talks fail and the Taliban pursue victory through a military strategy. Strongmen are re-emerging and the militia-making industry is back in business with full force. Already, the country is awash with weapons and ammunition, enough to meet the requirements of a prolonged war. Additionally, given that the conflict has deep foreign drivers on top of internal facilitators, a re-eruption of violence would no doubt lead regional sponsors to step in to secure their borders and geopolitical interests by sponsoring and arming proxy groups.

There is precedence in modern Afghan history for such a defense strategy against the Taliban. In 1996, anti-Taliban figures and groups, with the help of the region and specifically the axis of Russia – Iran – India, put up a national resistance against the Taliban in northern, central and western Afghanistan. Since then, many of these strongmen have been part of the establishment and political order of post 9/11 Afghanistan. Many of them also believe that the Taliban only understand the language of power and that it is time for Afghans to unite against the group. They are now organizing and mobilizing to stage what they call a “second national resistance” in partnership with the Afghan National Defense and Security Forces (ANDSF). The untimely withdrawal of US and NATO forces has induced former political rivals to join forces and form a united front.

In this context, the Taliban have a choice: make peace or face a prolonged civil war akin to Syria and Libya. The departure of US-NATO troops has emboldened them, leading them to believe that they can topple the government in Kabul. However, if history is any guide, this is a strategic miscalculation that would plunge Afghanistan into a civil war with regional and global spillover effects.

As Afghans mobilize, Western intelligence agencies are also recalibrating their approach and programs towards Afghanistan. Importantly, they are preparing for the reality of having no eyes and ears on the ground to assist them with counter-terrorism and other regional geopolitical rivalries. They share with Afghanistan’s neighbors an interest in preventing Afghanistan’s descent into chaos and the return of the Taliban’s Islamic Emirate, which could re-ignite the fires of jihad across all across Central and South Asia. Indeed, US Special Envoy Zalmay Khalilzad has recently expressed that there is a global and regional consensus against a military takeover by the Taliban, and that the return of an Islamic Emirate is unacceptable both to the region and the world

Meanwhile, as the Pentagon and US Department of State figure out the shape and size of their upcoming over the horizon (OTH) counter-terrorism mission in Afghanistan, many military experts and strategists are asking key questions. First, what will this new military strategy look like and what will its core objectives be? Second, what will this strategy cost and how will Afghans support themselves? And finally, who will be the sponsor(s) of this new war and what will it mean for the broader region and the world?

The Afghan Taliban need to be deterred militarily from pursuing war in the hope of a victory after the US withdrawal. This requires a holistic and comprehensive military deterrence strategy. Right now, two options are at hand. The first is a state-centric, Bashar al-Assad style resistance of fighting to the last man, which would lead to an ANDSF centric and united military sector pushing back against the Taliban. The other is a series of anti-Taliban groups forming a national military alliance to oppose a Taliban military takeover and preserve the state.

Unlike the Syrian state-centric resistance model, the Afghan model should have the support of a global alliance to deter the Taliban and force them to accept a political settlement. This military deterrence strategy should have four pillars: ground forces provided by the ANDSF and Afghan militias; offshore US air cover and logistical supply chain support; mobilization of Afghan groups in support of ANDSF and the state under the protection and support of regional players; and a robust intelligence apparatus for peace and counter-terrorism.

In addition, the Afghan defense strategy should consist of a three-layered defense system. At its core would be a resized, restructured, more mobile, and offensive ANDSF supported by the United States and NATO (given its years of NATO training and gear). Next would be various anti-Taliban militias who are either supported by the Afghan state or regional players who oppose the return of the Taliban’s Islamic Emirate. The third layer consists of special operation forces (SOF) which would carry out targeted counter-terrorism operations against foreign fighters who operate under the umbrella of the Taliban. This Afghan defense strategy is inevitable given the military circumstances on the ground but is also effective and would converge US and regional security interests against the revival of terrorism in Afghanistan.

We saw this model play out in the immediate aftermath of 9/11 when, in October 2001, the United States allied itself with the former Northern Alliance and other anti-Taliban forces. In that context, the US provided air cover and logistical support while Afghans provided the ground forces and the region mobilized their proxies in support of a single goal – to topple the Taliban’s Emirate. In less than two months, the Taliban regime was gone.

In addition to being cheap, this strategy would preserve the gains of the last two decades and force the Taliban to come to a negotiated settlement when they see that a military victory is not possible and that prolonged war is not in their best interest.

Many Afghans term mounting such a front against a Taliban military takeover as a sacred defense and national resistance whose sole objective is to prevent a total military victory by the group and pave the way for a negotiated settlement.

By leaving Afghanistan before a political settlement has been reached, the United States has damaged its credibility and global standing with allies and friends around the world. Some in Afghanistan draw comparisons between US-NATO military engagement with Afghanistan and the Russia-Iran partnership with Bashar al-Assad in Syria. Whereas the Russians and Iranians managed–albeit with brutal and inhumane tactics–to secure a strategic victory, the United States and its allies failed in Afghanistan.

While these comparisons are unavoidable, the Taliban and regional foes of the United States taunt Afghan officials about the unreliability of Washington and its military. That said, the United States could rectify this through a meaningful and effective engagement that shores up the Afghan government and ANDSF, preventing a Taliban military takeover and the return of their extremist Islamic Emirate. The key question is, how it can be done?

As the United States is designing and shaping its OTH counter-mission for Afghanistan, at least four elements would play a key role in restoring the United States’ standing with its Afghan allies: building up the Afghan state’s intelligence apparatus to partner on counter-terrorism; providing long-range close air support to the ANDSF; providing backend logistical and financial assistance, such as remote training, salaries, maintenance, and equipment to Afghan forces; and providing economic and humanitarian assistance to the Afghan state so that it can demonstrate its legitimacy over the Taliban after the United States departs.

The cost of spillover effects and the role of the region

Despite their differences, the United States and its allies share with the region a strong interest in preventing Afghanistan from descending into chaos that would allow al-Qaeda and other terror networks to rebuild safe havens.

Afghanistan’s neighbors can no longer afford to sit idly and rely on the security guarantees provided to them by extra-regional security providers. They also can no longer bank on proxies in Afghanistan to be security providers nor rely on buffer zones across borders with the expectation that the fire in Afghanistan will not engulf them. Indeed, the region will be the first to feel the impacts of an Afghan civil war and the revival of terror networks.

Countries surrounding Afghanistan, near and far, need to roll up their sleeves and contribute to the security and stability of the country via three channels: directing their proxies to augment and serve as an auxiliary force to ANDSF; leveraging political influence for a political settlement against various groups that enjoy their protection and support; and, once a political settlement is reached, ceasing to support and disbanding their proxy groups while committing to a neutral Afghanistan.

An unstable Afghanistan will directly impact the security of Islamabad, Tehran, Moscow, Tashkent, Dushanbe, and Afghanistan’s other neighbors. History has proven that the policy of “managed chaos” in Kabul–in pursuit of geopolitical objectives–is a recipe for disaster with direct security and humanitarian spillover effects on the region.

The way forward – Hard choices for the Taliban and the region

The Afghan government, the region, and the United States can bring together their security assistance programs as elements of a single strategy with the ultimate objective of preventing a Taliban military victory and avoiding civil war in Afghanistan.

In pursuit of this goal, the United States and its NATO allies can continue to provide financial, logistical, and technical-military support to Afghan security forces as well as financial assistance to the Afghan state. The region can mobilize proxy forces in support of the Afghan state with the aim of forcing the conflicting parties to a political settlement. And, finally, the Afghan government can provide the manpower and ground forces needed to fight terrorism and force the Taliban to give up the idea of a military victory.

This is a historic opportunity for the region, the United States, and its NATO allies to engage a set of common objectives and pool their resources under a single strategy to achieve peace and stability in Afghanistan and the region.

The future of the transatlantic partnership with Afghanistan

AN #ACFRONTPAGE EVENT – The exclusive launch of the Transatlantic Charter on Afghanistan as part of the Strategic Dialogues on and with Afghanistan, hosted by the Atlantic Council’s South Asia Center and the Rockefeller Brothers Fund.

The democracies meeting this week in Europe should signal continued concrete support for Afghans who do not share the Taliban’s worldview and who seek a peace without a Taliban-imposed regime.

Image: PERSONAL COPY: The author interacting with members of the Afghan military under the wingof a C-130 Hercules in the military airport during one of his visits to the frontlines at one of the ANA Corp commands.