The Atlantic Council, in partnership with the Delegation of the European Union to the United States, is delighted to invite you to the EU-US Future Forum (EUFF), a unique convening of leaders and stakeholders in dialogue to develop a new transatlantic agenda and momentum for EU-US cooperation. The relationship with the EU is one of America’s greatest assets, and in a time of global recovery and transition, this seventy-year partnership serves as a foundation on which the EU and the US can foster collective security and prosperity. Join us on May 5-7, 2021, as we celebrate the successes of the EU-US relationship and look to the next seven decades together.

Anchored by a series of high-level dialogues between EU and US officials on the themes defining the transatlantic relationship, the Forum explores the most important elements of the EU-US relationship, including the coronavirus recovery, trade, foreign and security policy, technology and the digital transition, research and innovation, common values, and climate change. The program will include a combination of moderated discussions, interviews, keynote addresses, and storytelling highlights that share expert insights, tackle problems, generate new ideas, and help to identify policy recommendations.

This event is hosted by the Atlantic Council Europe Center. The EU-US Future Forum will take place virtually. To register, please visit our registration form on Socio. Follow the conversation using the hashtag #EUFF2021.

H.E. Aušrinė Armonaitė
Minister of the Economy and Innovation of the Republic of Lithuania

H.E. Domingos Fezas Vital
Ambassador of the Portuguese Republic to the United States

Amb. Anthony Gardner
Former US Representative to the European Union

Amb. Ronald Gidwitz
Former US Ambassador to the Kingdom of Belgium; Former Acting US Representative to the European Union

The Hon. Jennifer Granholm
US Secretary of Energy

H.E. Kersti Kaljulaid
President of the Republic of Estonia

H.E. Stavros Lambrinidis
Ambassador of the European Union to the United States

H.E. Mateusz Morawiecki
Prime Minister of the Republic of Poland

The Hon. Wendy Sherman
US Deputy Secretary of State

Please note that all times are Eastern Daylight Time (EDT).

On the first day, we highlight the transatlantic ties that bind: the history and values that unite us in the digital age.

Welcome to the EUFF

H.E. Stavros Lambrinidis, Ambassador of the European Union to the United States

In Depth | Embracing Our Transatlantic History

H.E. Aušrinė Armonaitė, Minister of the Economy and Innovation of the Republic of Lithuania

In Dialogue | Strengthening the Foundations of Liberal Democracy

H.E. Kersti Kaljulaid, President of the Republic of Estonia

On the second day, we explore what the EU and the US can do together to move out of the COVID-19 crisis to recovery, from economic resilience and trade to the green transition, energy, and climate change.

In Dialogue | Trade and Economic Recovery: A Business Perspective

Amb. Ronald Gidwitz, Former US Ambassador to the Kingdom of Belgium; Former Acting US Representative to the European Union

In Depth | Addressing China Together

In Dialogue | The Transatlantic Relationship and the Green Transition

In Dialogue | A New Chapter for US-EU Climate Leadership: Aligning Strategies and Actions

The Hon. Jennifer Granholm, US Secretary for Energy

In Dialogue | Engaging Allies on Strategic Competition with China

In Dialogue | The View from Athens

In Dialogue | A Conversation with Polish Prime Minister Mateusz Morawiecki

H.E. Mateusz Morawiecki, Prime Minister of the Republic of Poland

On the third day, we dream big: what we can achieve together when we act together in the world?

In Dialogue | Rebuilding Transatlantic Economic Cooperation for a Global Recovery

H.E. Domingos Fezas Vital, Ambassador of the Portuguese Republic to the United States

In Depth | Rebuilding Multilateral Cooperation for a Global Recovery

In Depth | Delivering the Summit for Democracy

In Dialogue | Explaining the Conference on the Future of Europe

Dr. Luuk Van Middelaar, Professor of Foundations and Practice of the European Union and its Institutions, Leiden University

In Dialogue | Engaging the European Neighborhood

Rector Federica Mogherini, Rector, College of Europe; Former High Representative of the European Union for Foreign Affairs and Security Policy and Vice-President of the European Commission

In-Depth | Presenting the EU as seen from the US

In Dialogue | The Next Transatlantic Decade

The Hon. Wendy Sherman, US Deputy Secretary of State

From May 5 to 7, the Atlantic Council’s Europe Center and the EU Delegation to the United States partnered to organize the first EU-US Future Forum (EUFF), a three-day open conference bringing together policy makers, experts, and the private sector to address the key challenges facing the transatlantic relationship in the coming decades.

Exclusive poll: Europeans are warming to the US in the Biden era

There’s “hope and optimism” about the transatlantic policies that the United States and EU can create today, said Benjamin Haddad, but there are also “some concerns on some disagreements that have not disappeared with the [US presidential] election.”

Deputy secretary of state: US not trying to ‘contain’ Russia and China, but hold them accountable

The urgent task before the US and EU: To craft democracy that ‘delivers’

Věra Jourová, vice-president for values and transparency at the European Commission, and US Senator Chris Murphy (D-CT) joined the Atlantic Council’s EU-US Future Forum to discuss how to defend democracy. 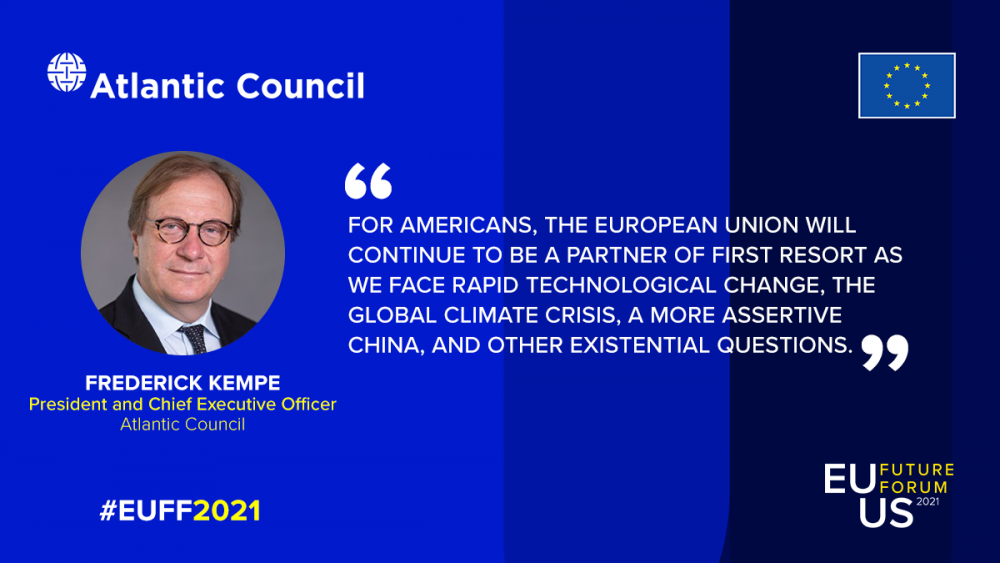 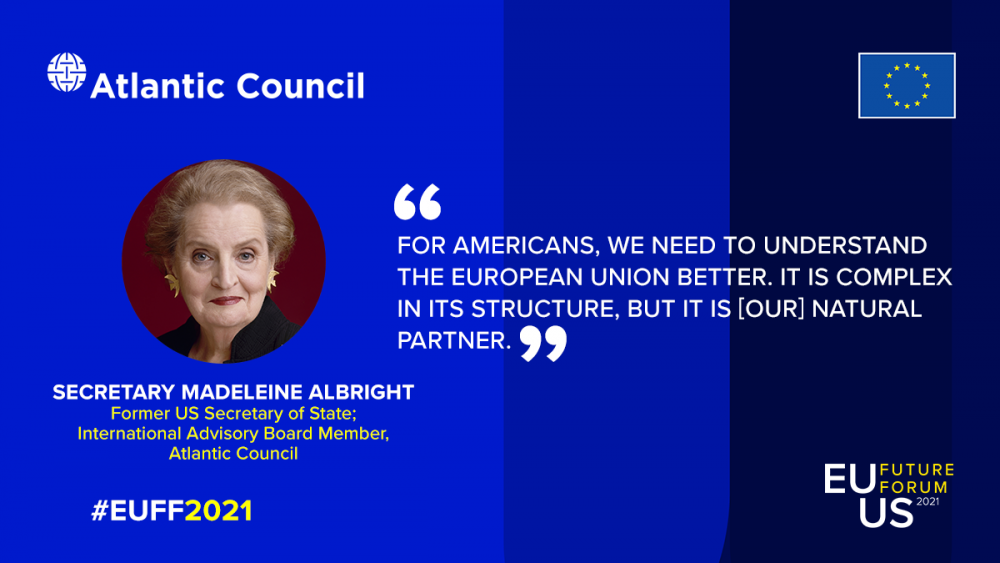 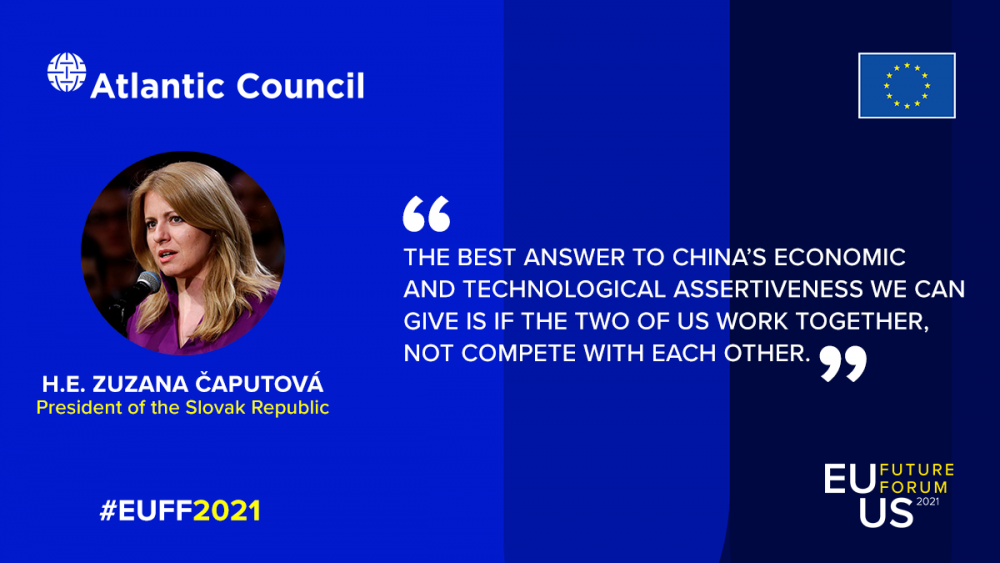 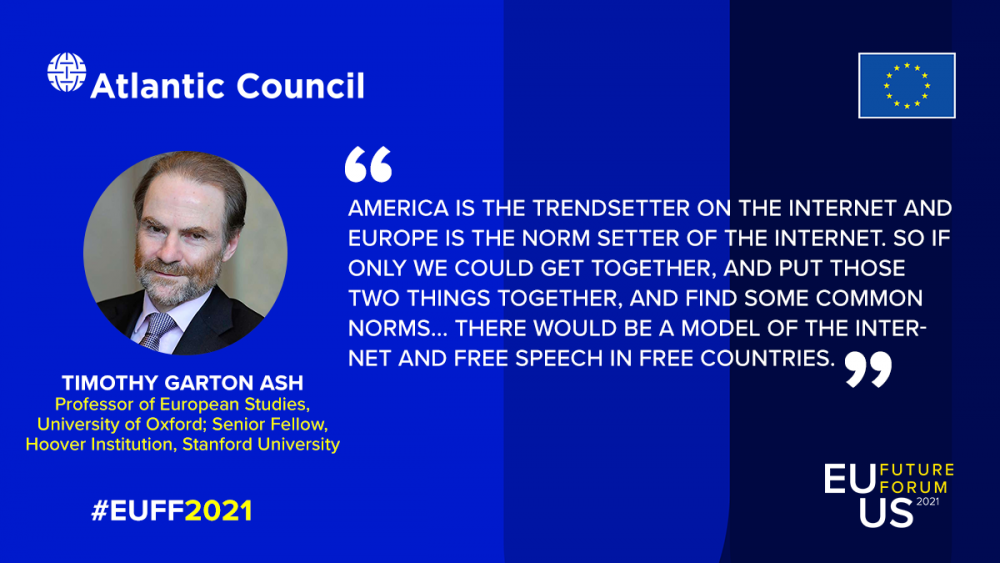 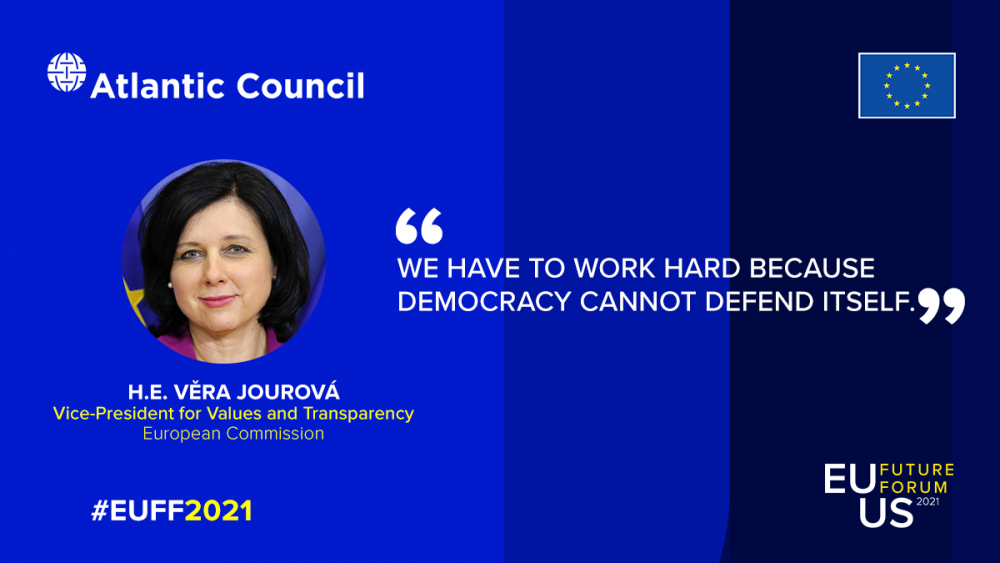 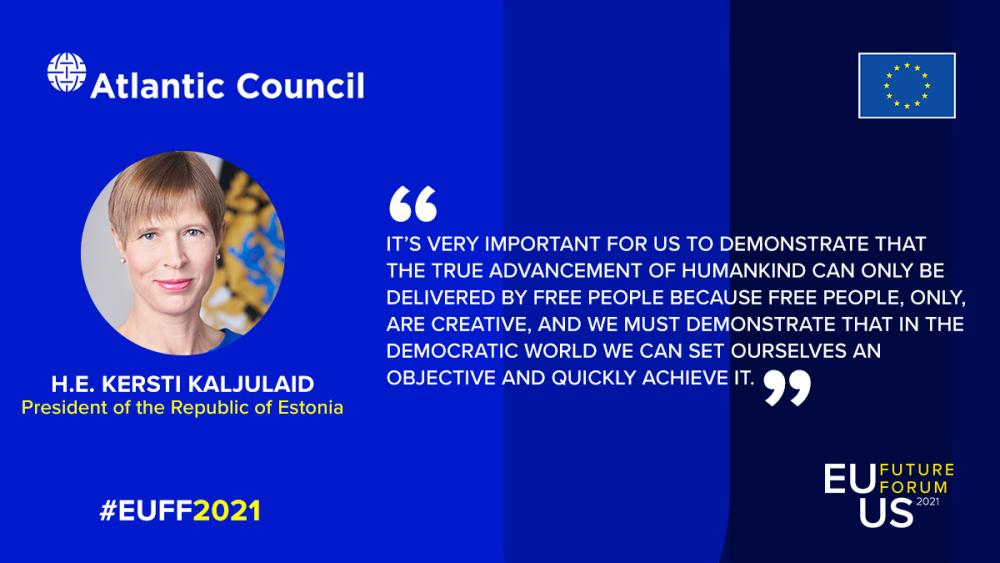 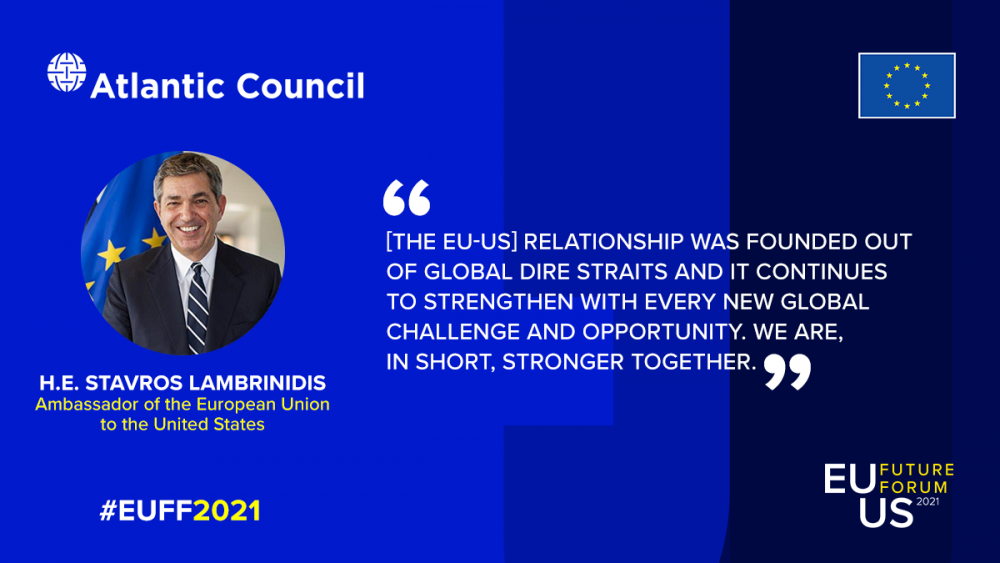 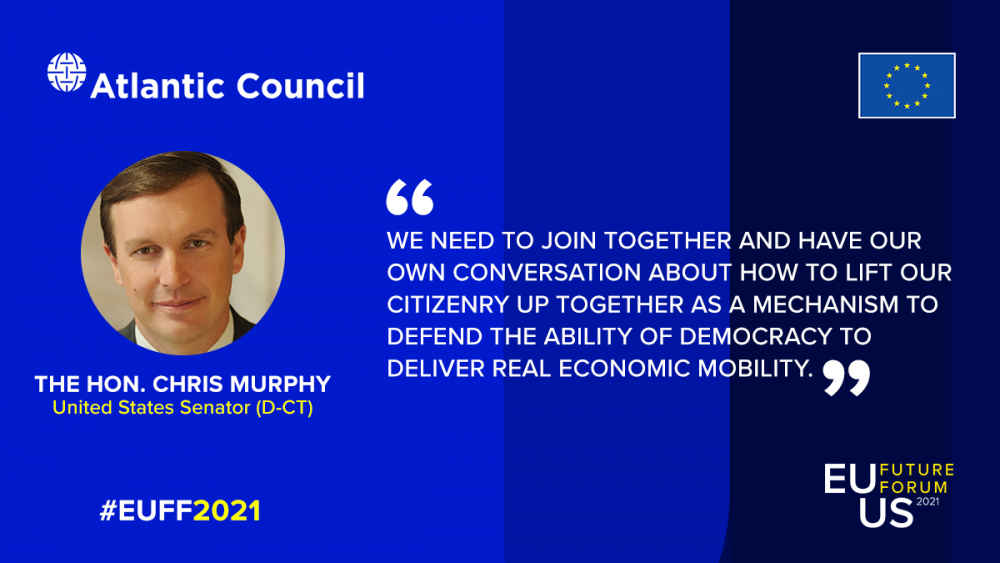 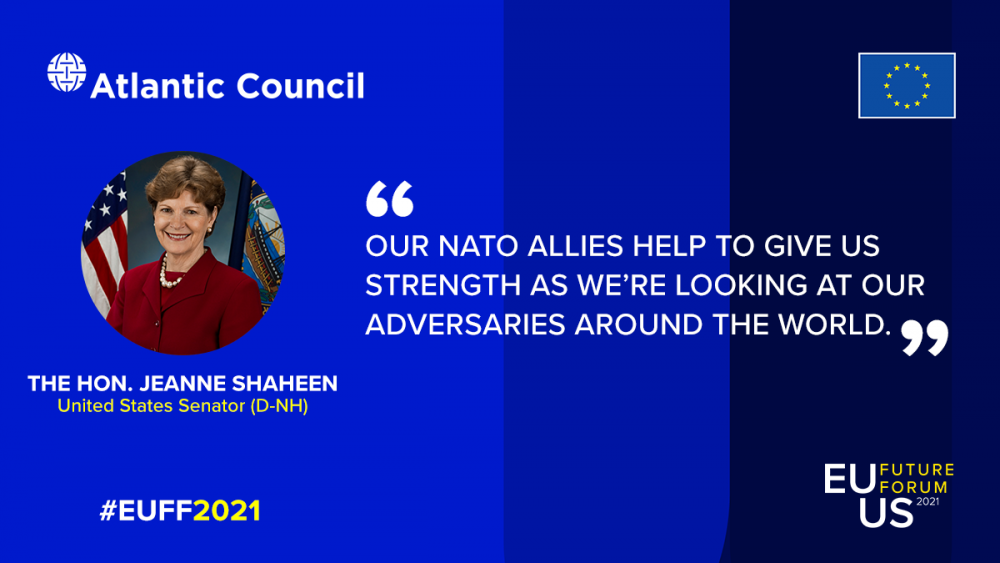 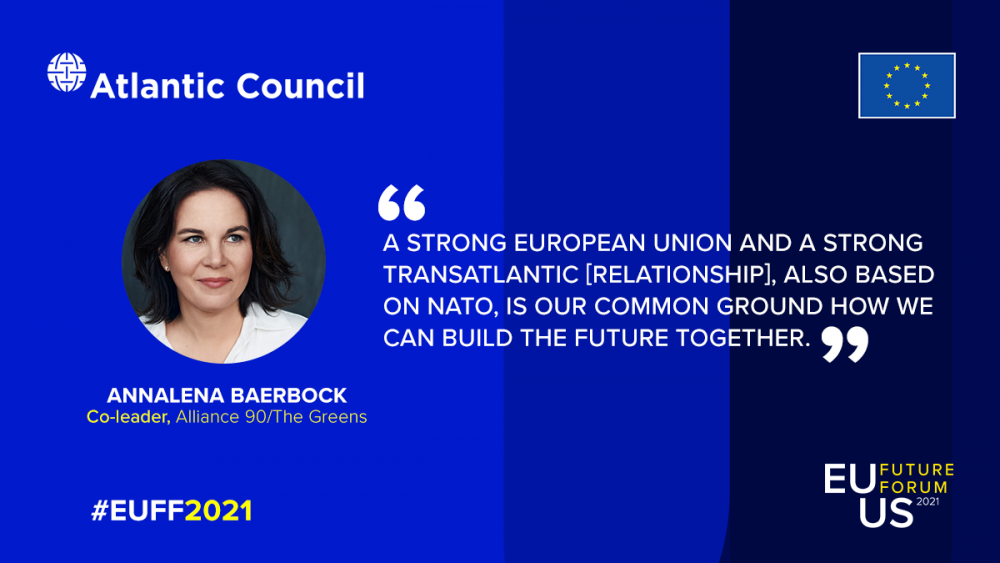 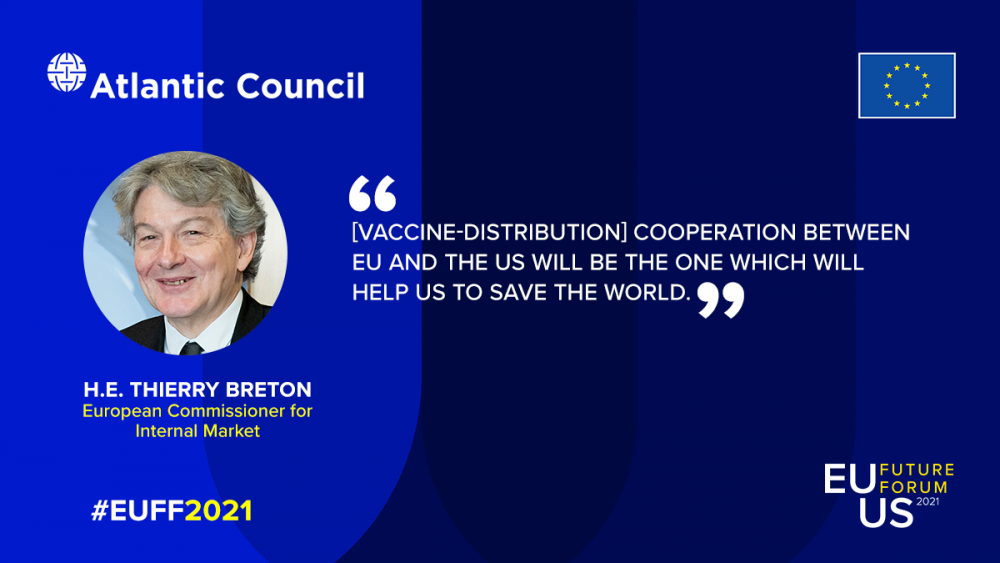 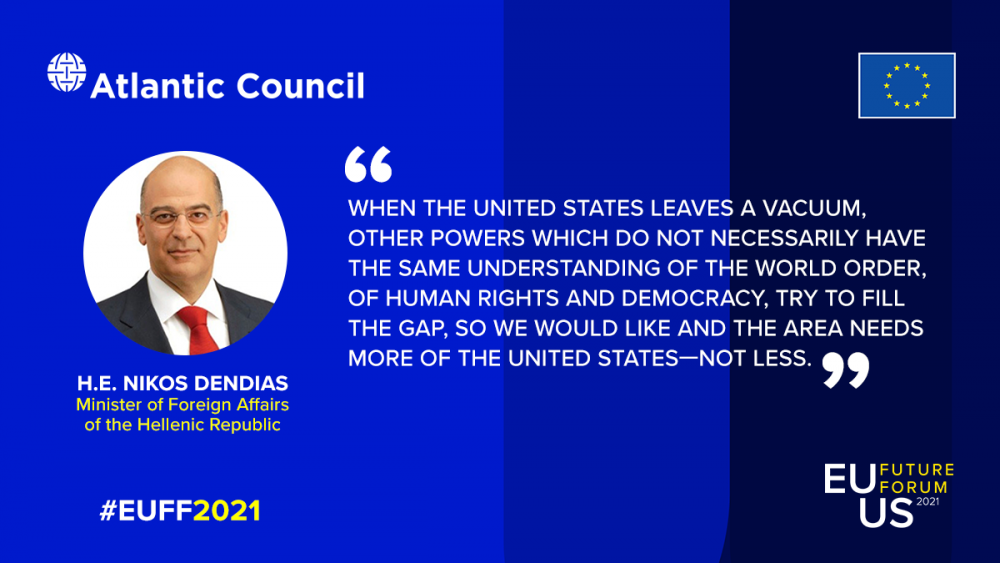 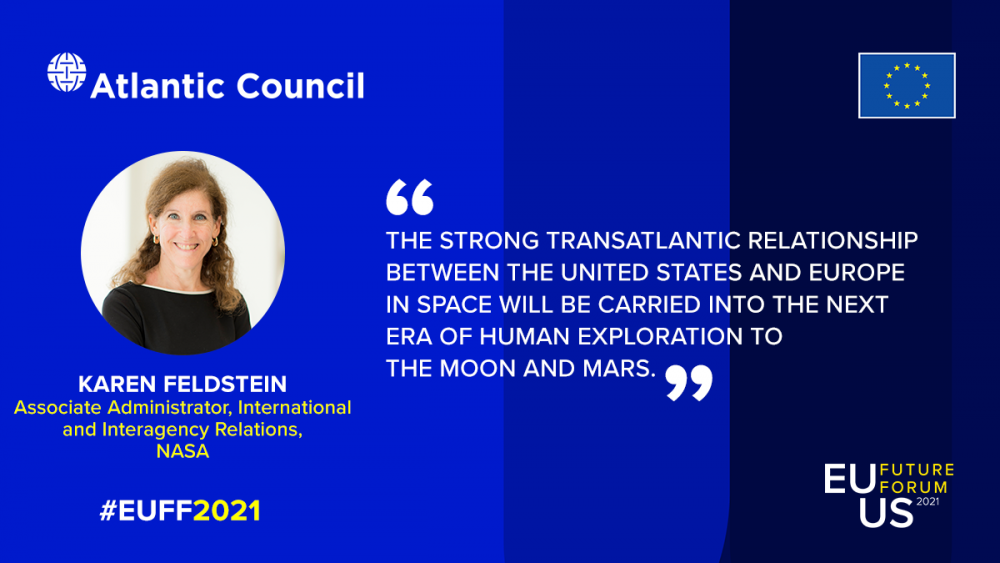 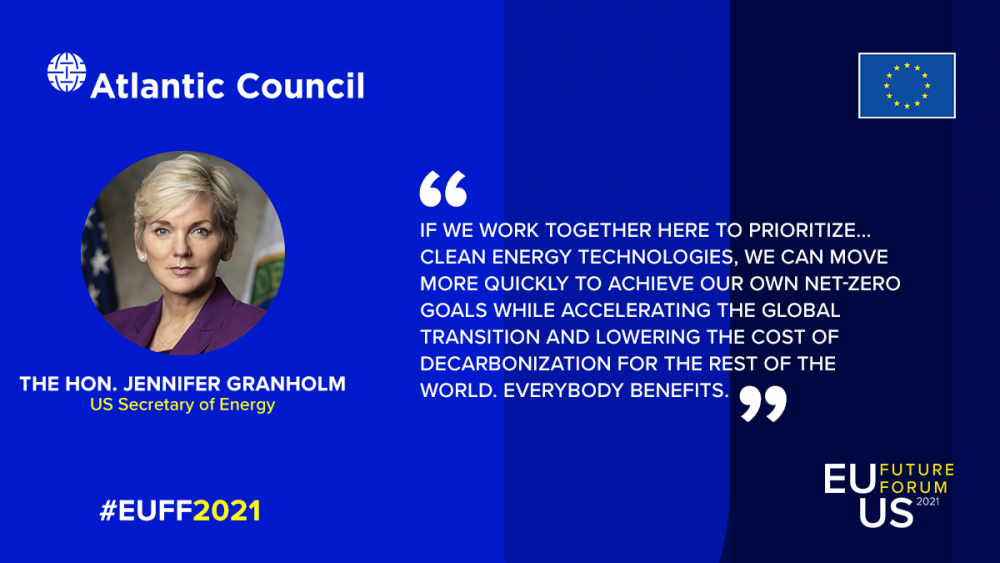 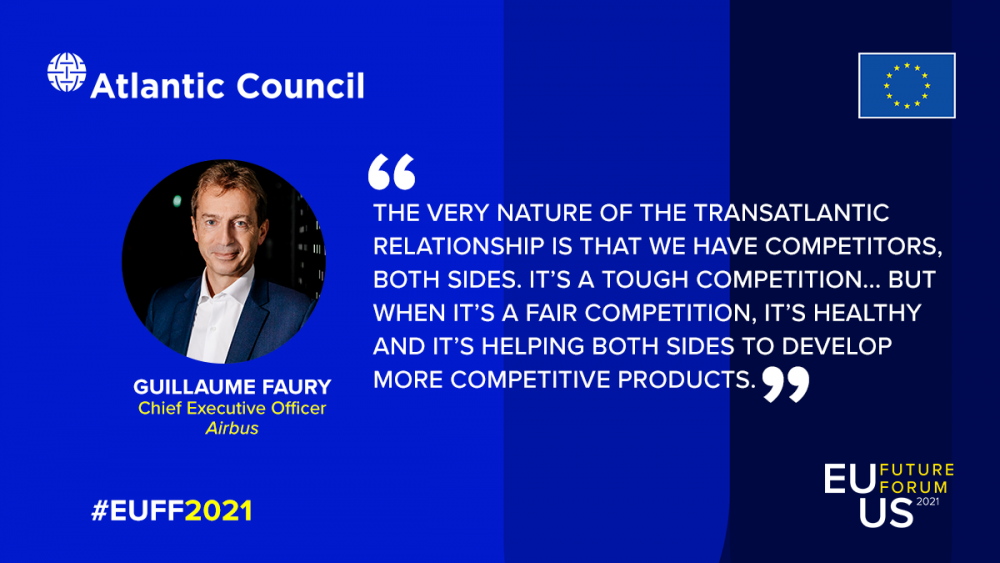 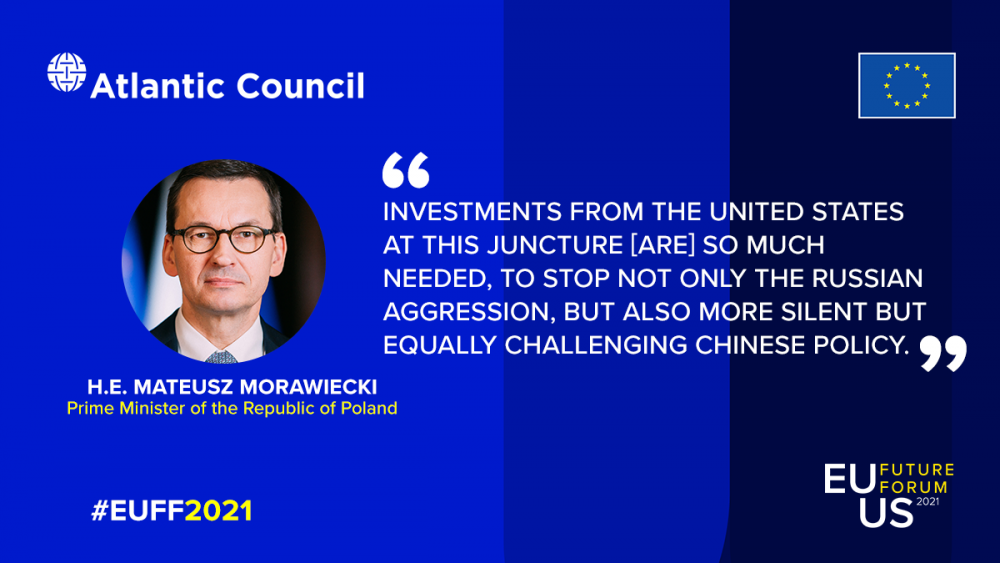 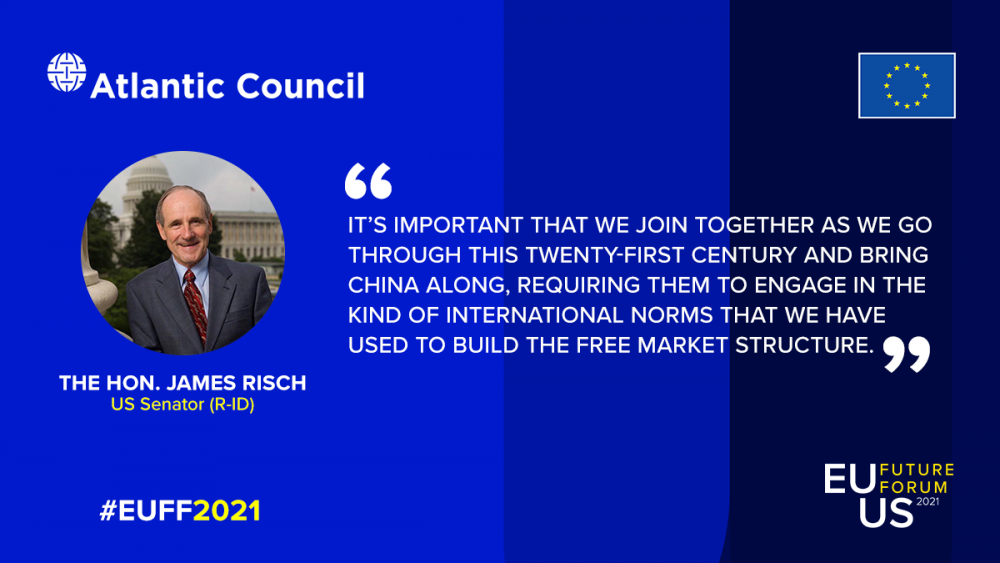 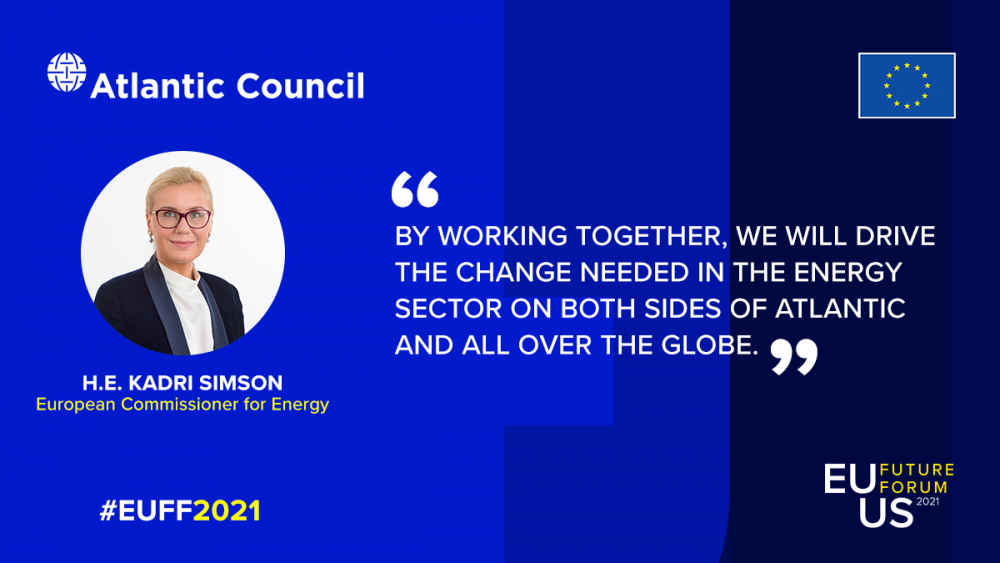 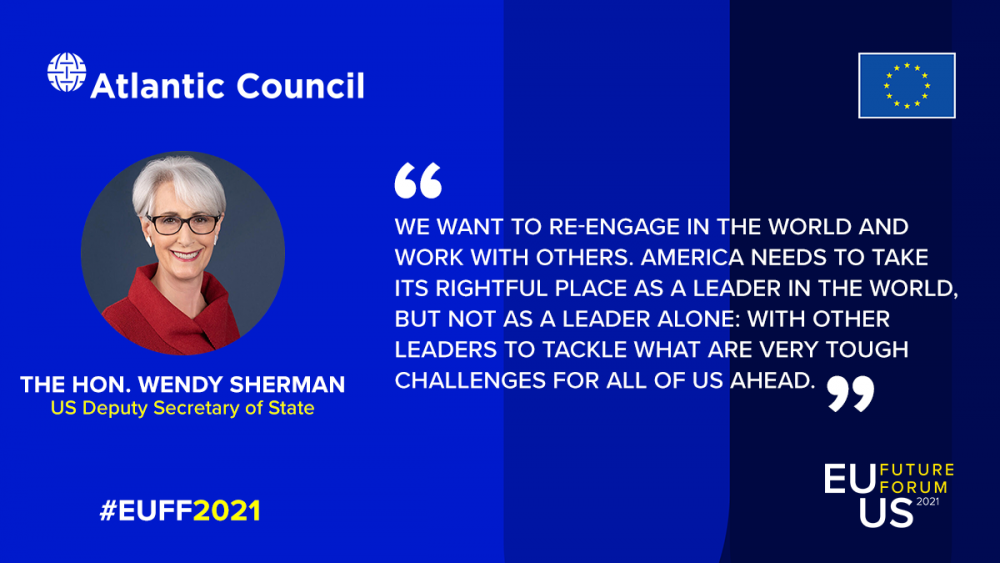 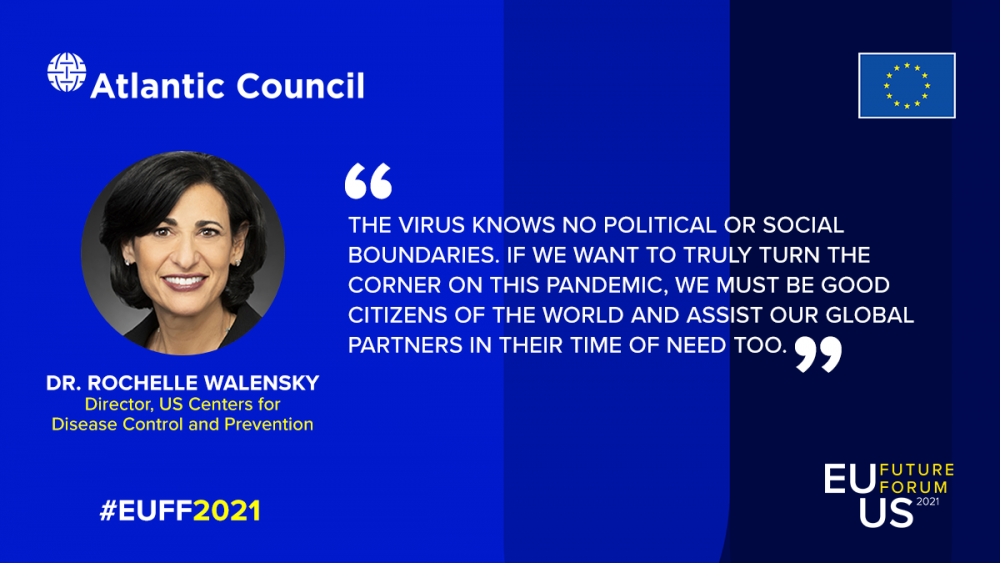 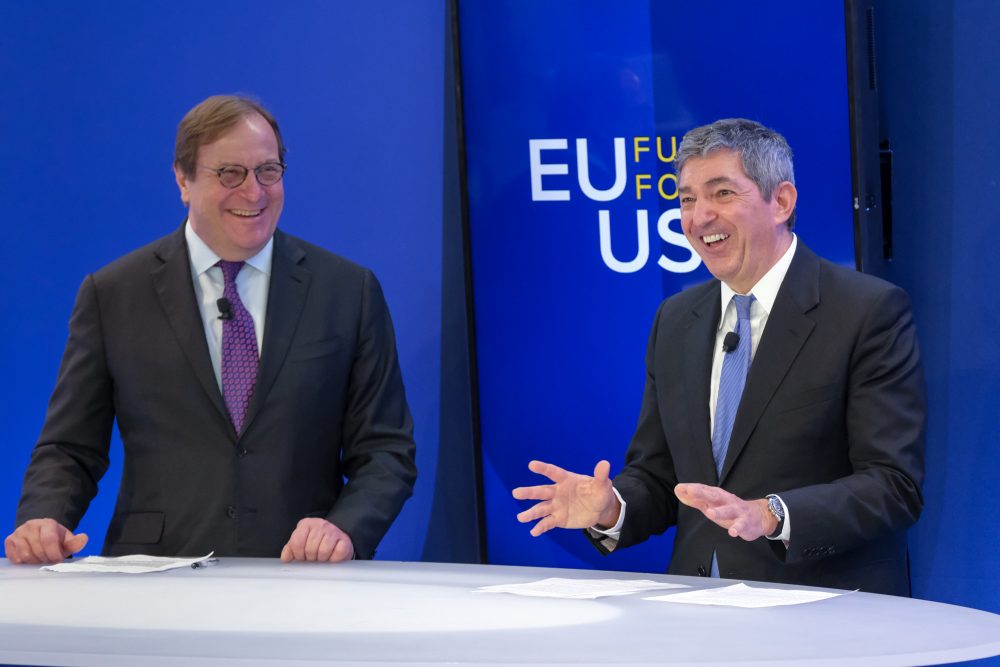 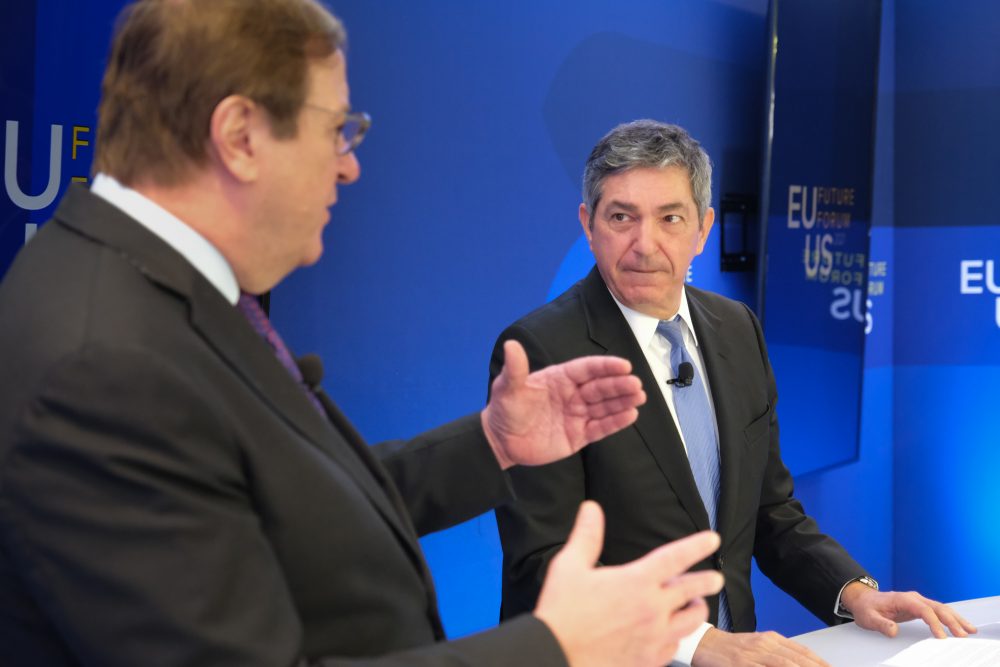 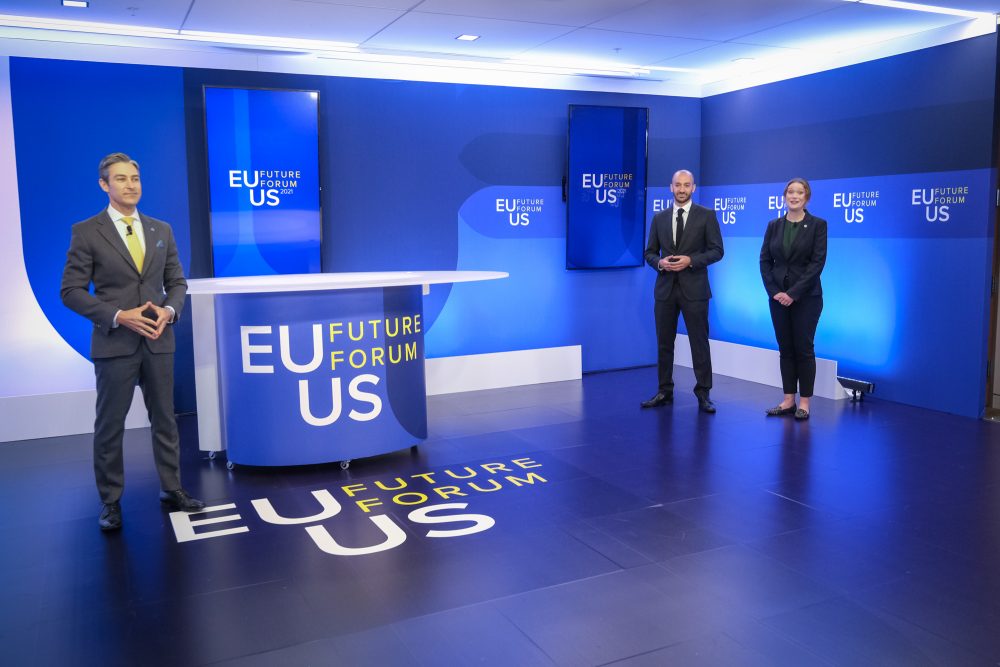 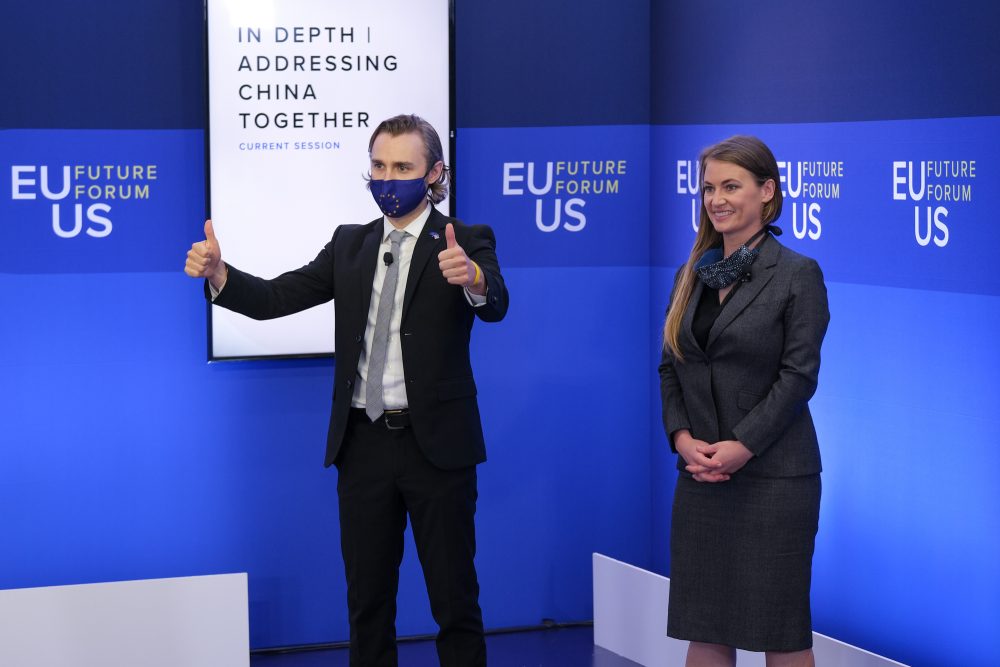 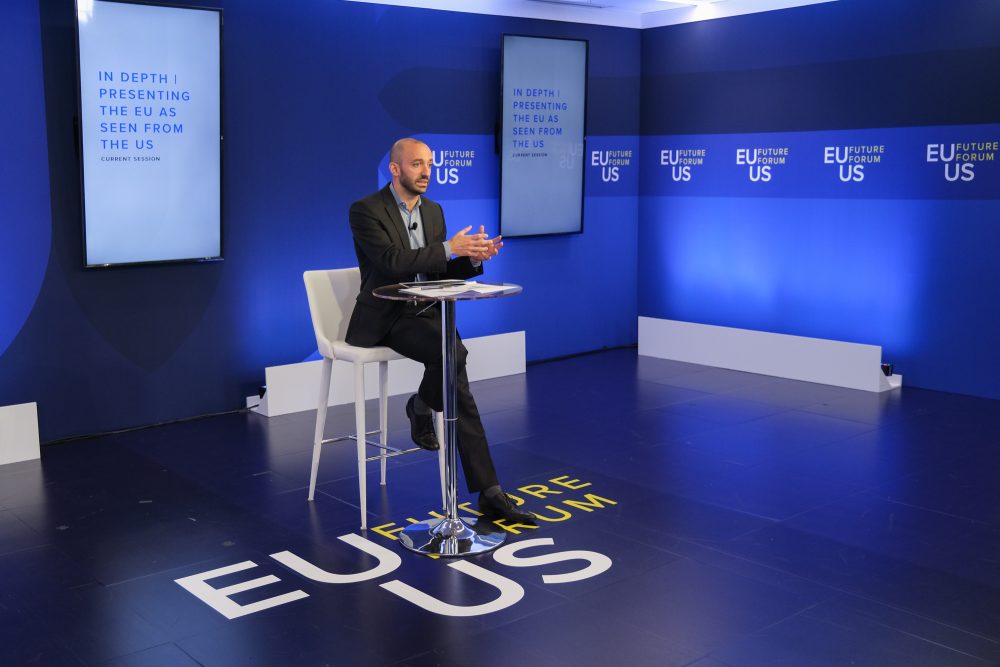 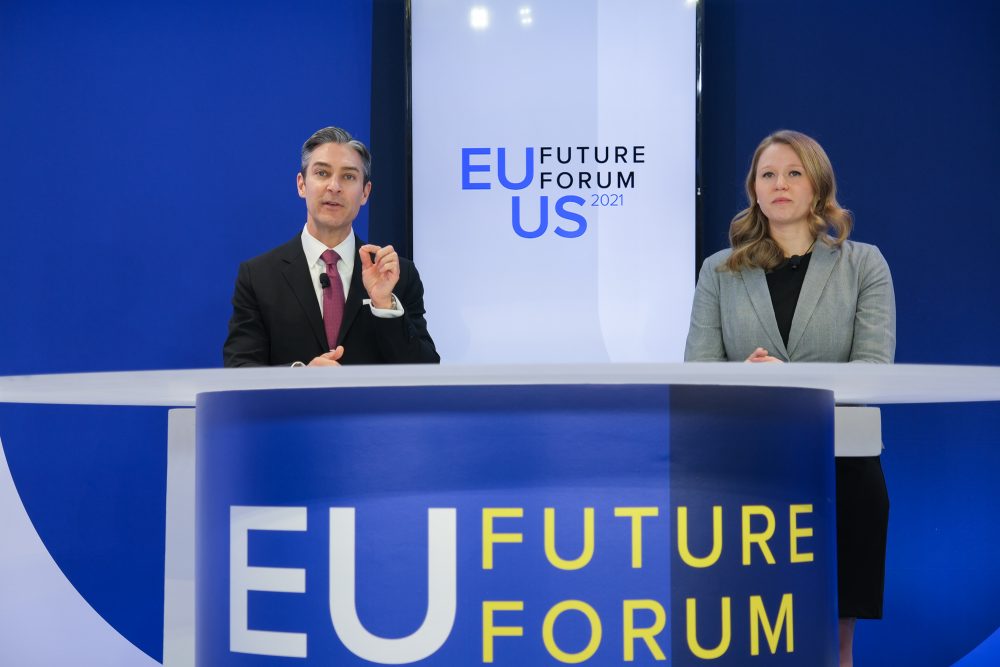 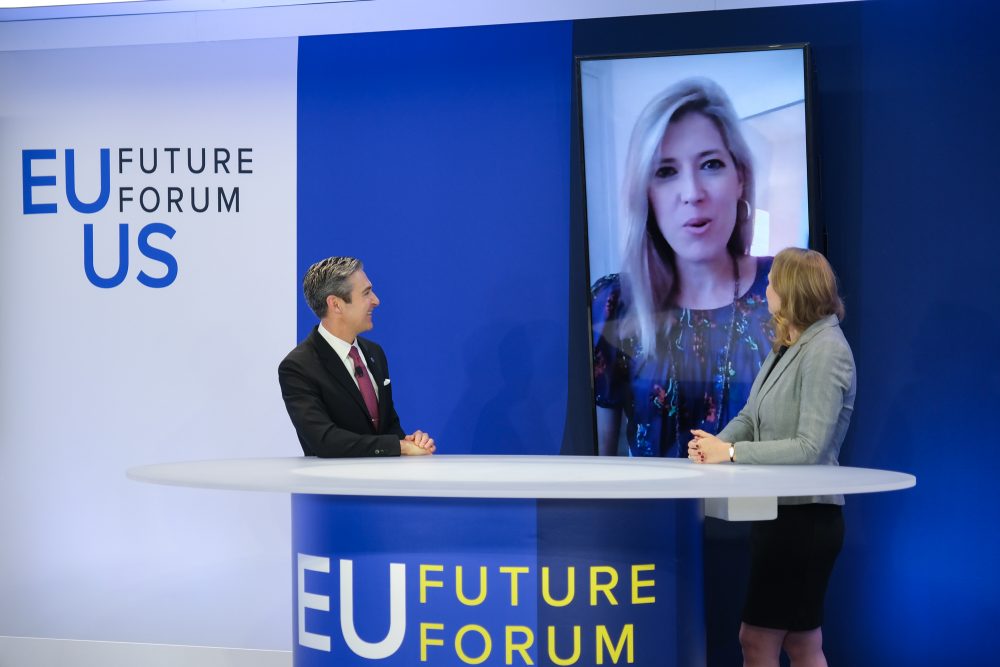 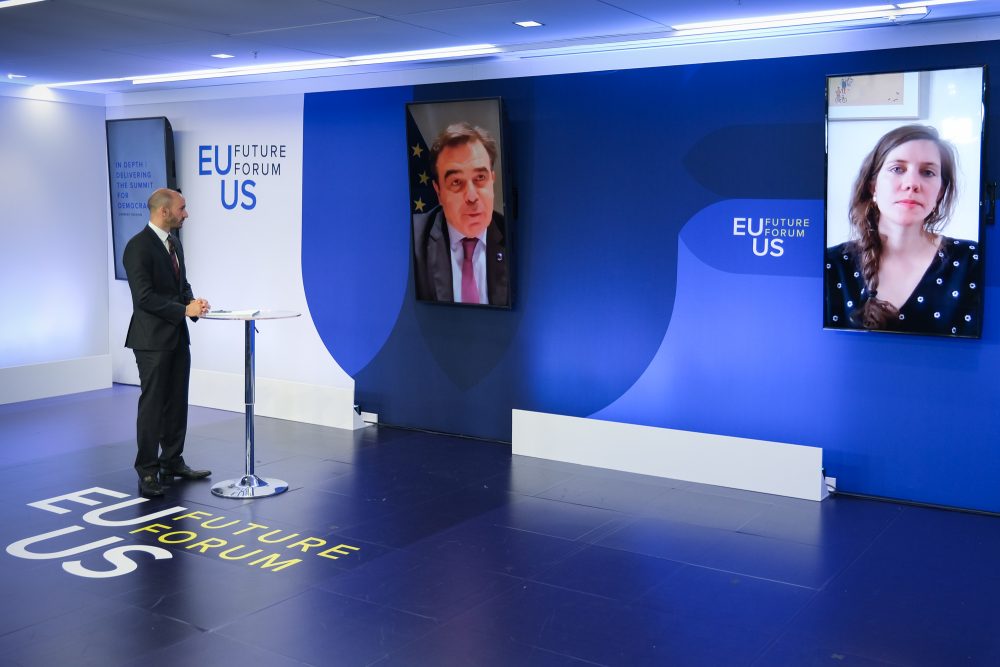 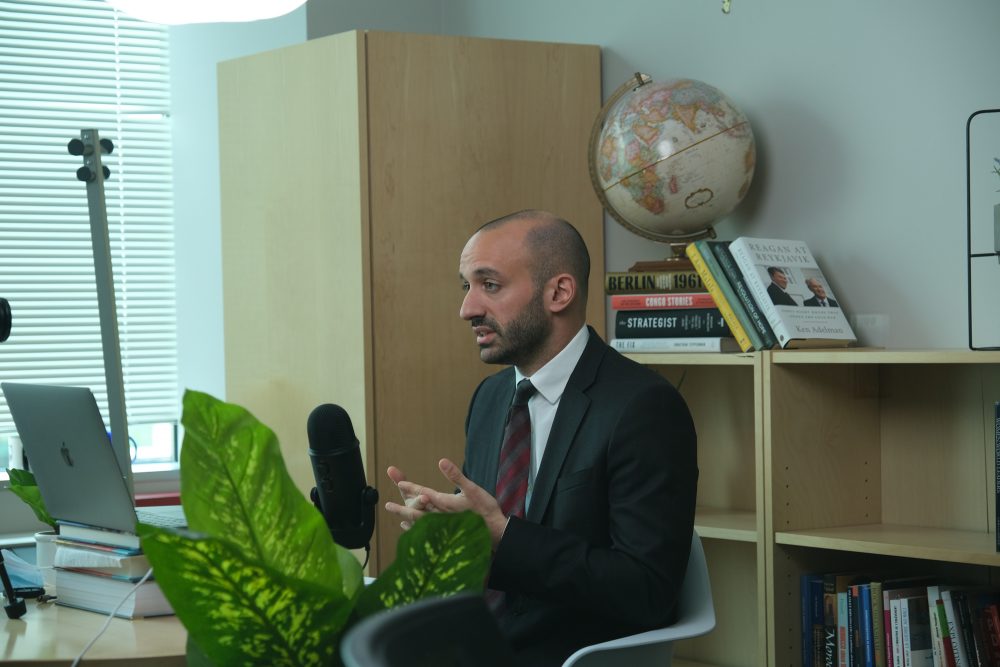 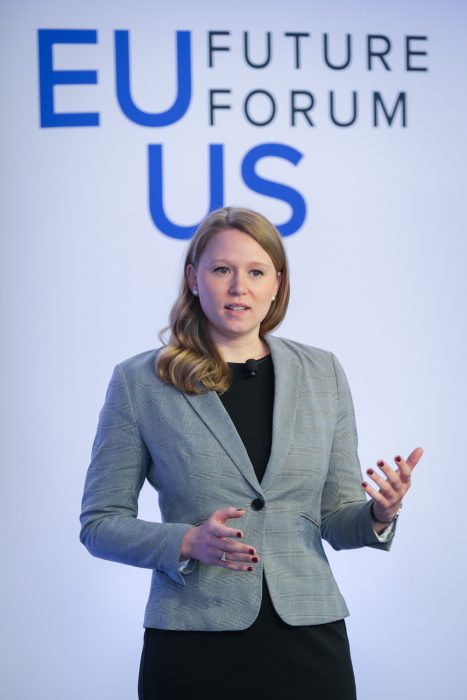 Slovak President Zuzana Čaputová said that resilience in the midst of major challenges is key and that the United States and European Union will need to work together to improve it.

Estonian President Kersti Kaljulaid and US Senator Jeanne Shaheen talked about how the US and EU should engage Russia, craft a transatlantic approach to Afghanistan, lead a strategy to mitigate climate change, and more.

Guillaume Faury joined the Atlantic Council’s EU-US Future Forum to discuss the future of the airline industry, as it emerges from the pandemic.

US Deputy Secretary of State Wendy Sherman joined the Atlantic Council’s EU-US Future Forum to talk about dealing with China and Rusisa, relations with Turkey, and the United States’ strategy to reengage globally and with Europe.

The Atlantic Council and the EU Delegation to the US convene leaders and stakeholders in dialogue to develop a new transatlantic agenda and momentum for EU-US cooperation.